You need to have Cloned the repo to your local disk.
You also need to already have changed something within your local clone.

What will we do

For the sake of learning, we will create a file named Test.md which will be available in AdvancedFunctions/Secret/Test and add it to mkdocs.yml.

The screenshots are taken from a Sublime Text 3 Editor (unregistered because on a VM), but you can use whatever editor you want to create/modify the files.
That's one of the advantages of working locally ^^.

Screenshots of the example files: 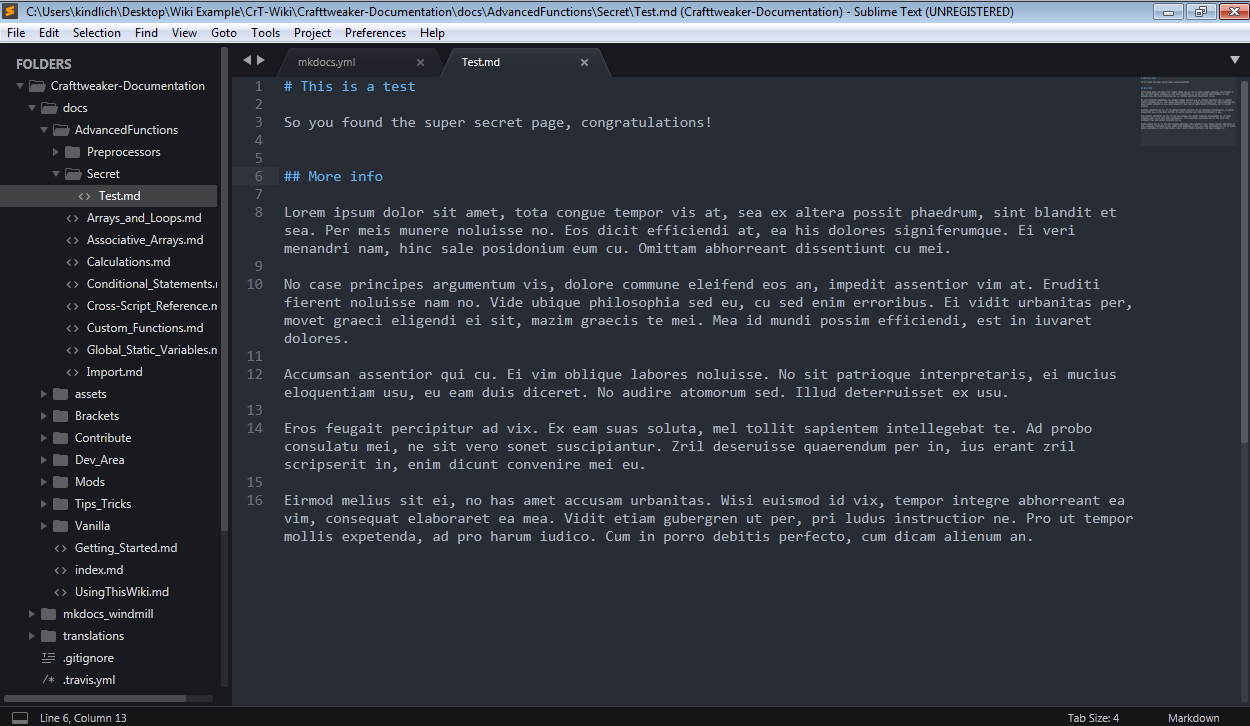 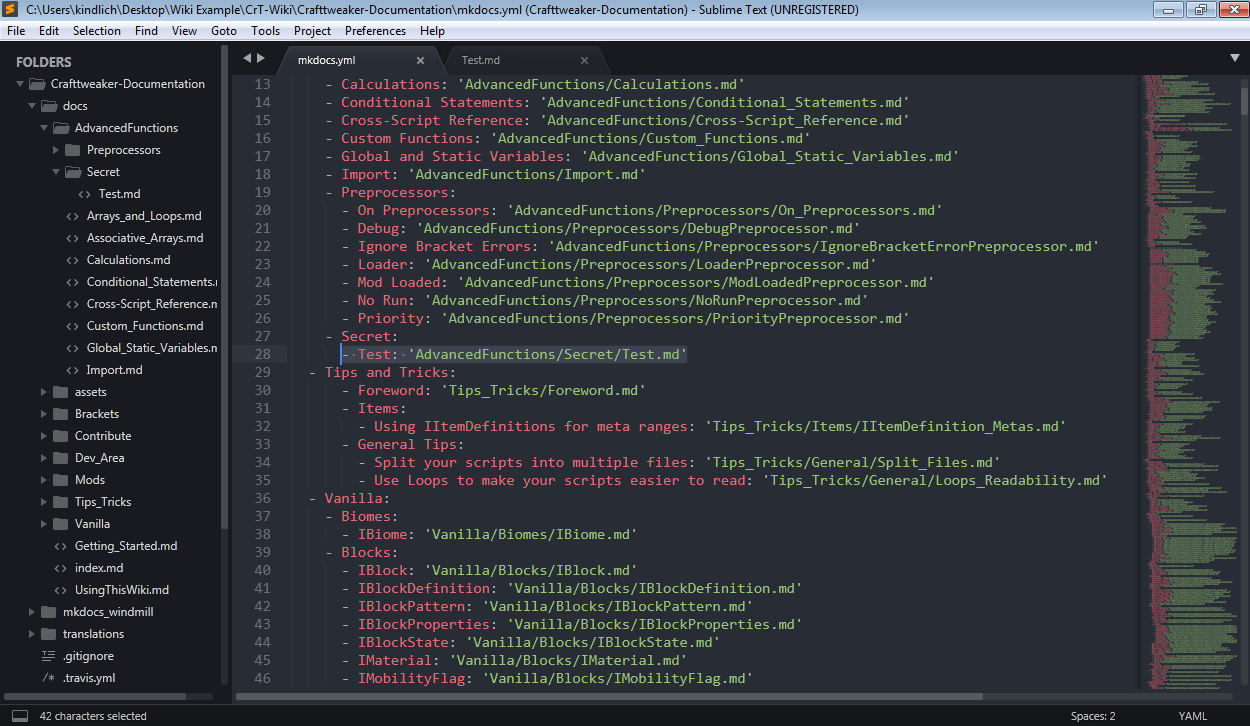 The git status command tells you which files have been changed.
In our example it shows us this: 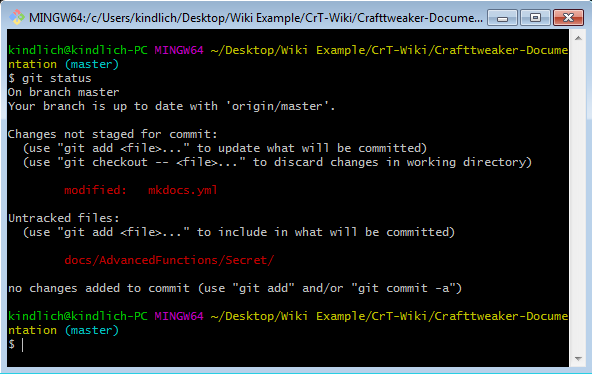 In both cases you can tell git to stage the files using either git add or git stage: 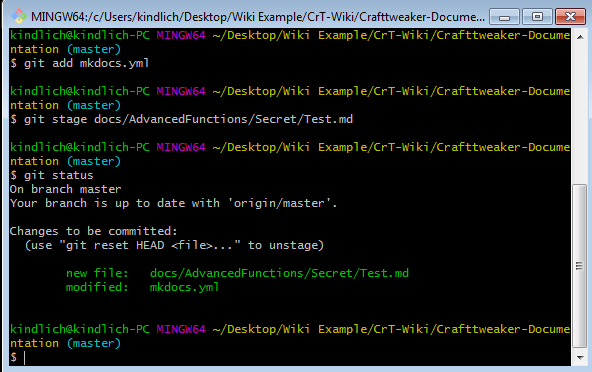 Now the files are staged to be committed and therefore printed in green. Notice, that if you were to modify either of those files now you would need to issue the add command again as it only adds the current state to the staging area.

Now that you have added the files you need to create a commit.
This can be done using the git commit command.

If this is the first time you create a commit using git you will see this message:

If your credentials are set correctly, you will get a screen like this: 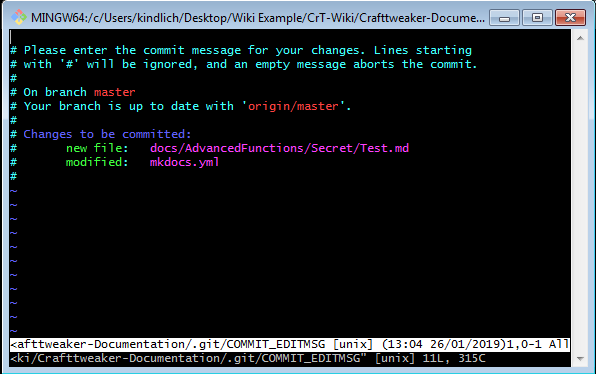 This is from the text editor GitBash uses for that.
To enter insert mode (so that you can write something), press the INSERT key.
Now you can write your commit title (first line) and the commit message (everything below that).
You can use the ENTER key to create a new line and everything starting with a # will be ignored.

Now you need to tell the editor that you are finished.
You can do that by typing pressing :x and pressing ENTER.

Here's a screen of what this may look like just before pressing enter to leave the editor:

If you don't like the bash editor or find it hard to remember what keys to press, you can also use the -m "message" parameter. You can open the " and leave it unmatched to be able to create line breaks. Finish by typing the maching ".
Like in the editor, everything below the first line is considered part of the commit message.

The same commit message as above could be achieved by doing: 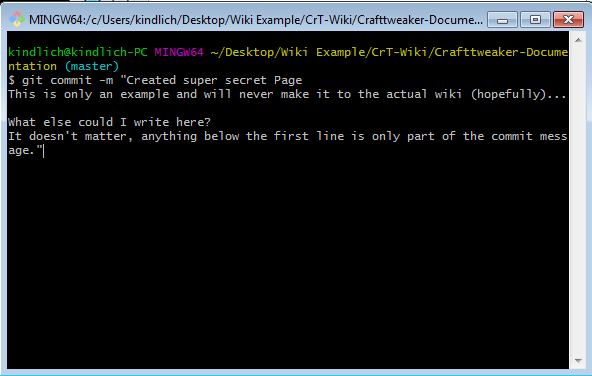 Now that you know how to create commits, you can push them to your fork.

Previous
How to clone
How to push
Next